The cosplayers are out and on the loose. Inspired by an Anime convention in town. -- Anon Guest

Andrew turned a corner and walked headlong into Wonderland. Or Narnia. Or Terabithia. It was hard to tell. Storybrook for certain, because everyone looked like they stepped into reality from the realms of imagination.

Someone in ornate, Japanese-inspired robes was having an animated conversation with a robot and a Deadpool. Iron man was inspecting a very small child in Victorian-style fancy lad gear. An elf of indeterminate gender was flamboyantly in the arms of a grim reaper for a bunch of people in red robes. Animals were walking around like they were humans. Witches were interacting with armoured suits three times the size of a human being.

The dress arrived, yesterday! And it looks GORGEOUS!

If I ever order another one [my size has gone down since January, when I ordered this one] I will be sure to include my arm girth because these sleeves are more than a little snug when I bend my arms. 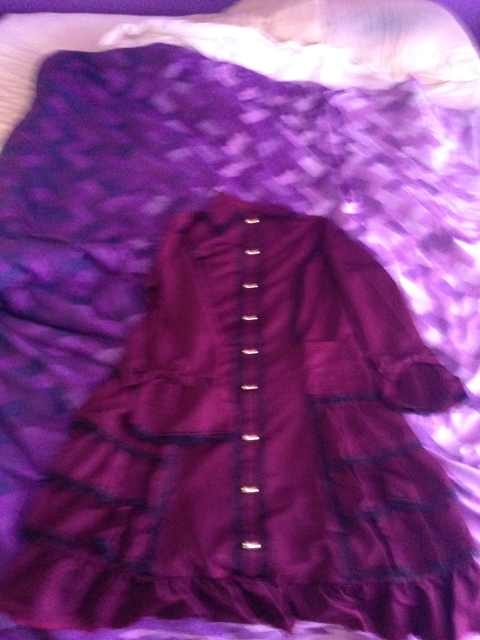 [Shown here: some blur of the dress just after it arrived]

You might not be able to see, but it has POCKETS! They're covered by the corset when I'm in costume, but who

Post makeup lesson one: I should have applied vaseline.

Not I, said the mouse.

Following the usual thing-making, I shall be posting pics of my horrible face again. Be warned. 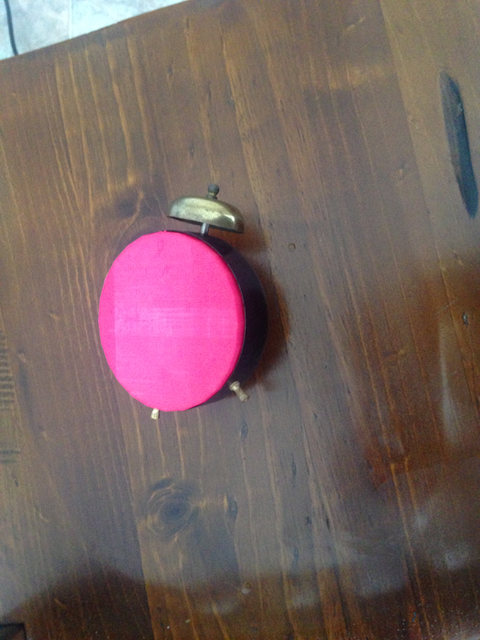 Beloved drilled some holes and we re-screwed in the embellishments. The bell will be pointing towards my rear, so people will

Be prepared. This blog contains images that some may find disturbing.

That's right, gentle readers. I finally got my keister in gear and did a makeup test.

But first - a little about what we're doing with the clock. 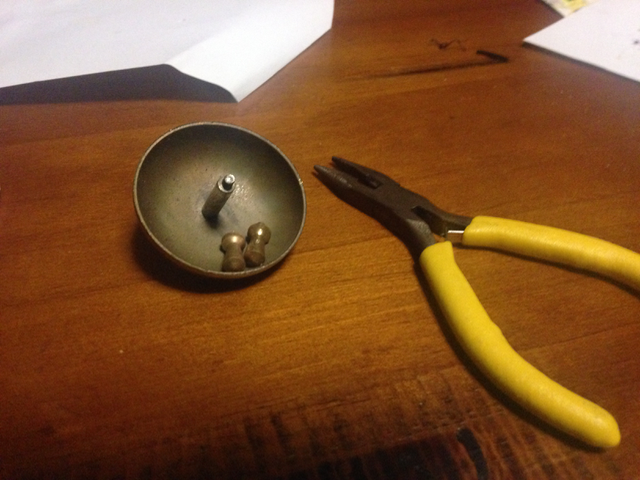 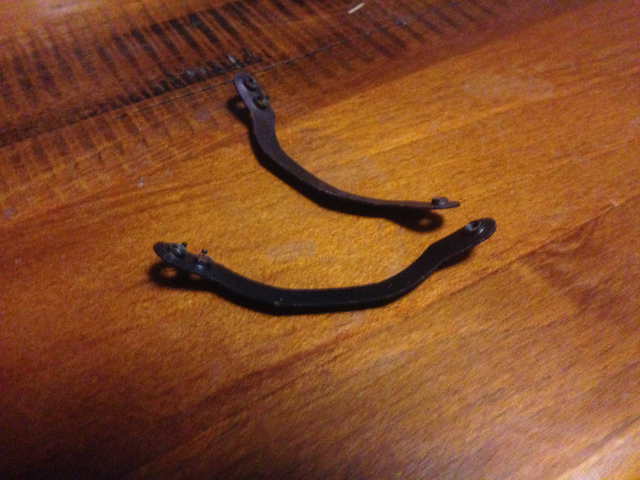 First, we took off the bell and the two brass feet so we could remove those weird little bracer things. They'd just get in the way. 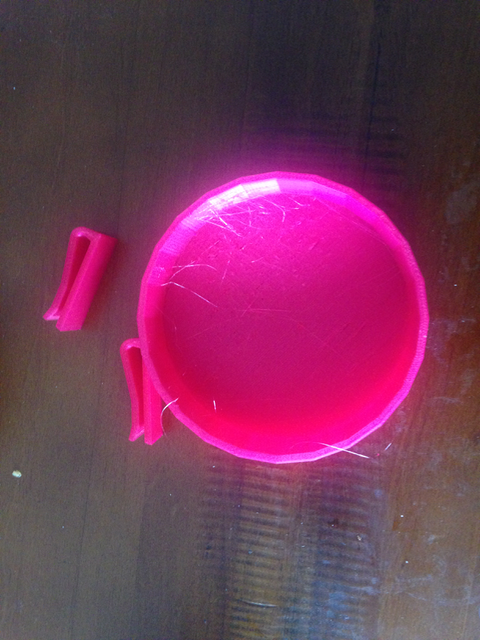 This is the result of

Welcome to the Last Mad Dash, the final 80Km relay in the Cosplay 2016.

Today, I am taking my admittedly limited funds to Spotlight to get the best look material for Bitzer's capelet. It has to be warm, because night-time temperatures in Tucson head to the single figures, it has to be woven, because MeMum can't pilot an overlocker, it has to look pretty nice, because Bitzer's a robot with standards, and it has to be cheap because I'm almost broke.

I hit the 92 zone, this morning. 92.6 kilos. On one hand - hooray, I'm losing weight and that should be good for me. On the other - boo, the corset I have is now too big. And I have no idea where to get cheap and comfy corset stuffing.

I have got in contact with the corset people to see if I can swap it out for the same style in one size down. Fingers crossed that it won't break

The blockage in my lungs is not preventing me from getting air, apparently. I've been taking the nebuliser to little or no actual effect. And certainly zero relief.

I couldn't sleep because of the blockage. It's a struggle to breathe in. So, long about midnight, we had the home service doctors swing on by and take a look at me. That's how I know my asthma meds are working, even though it feels like some invisible python is crushing my windpipe. Or

...but not the one where I have to spend a lot of money to keep breathing.

Beloved and I restocked my medication stores, yesterday. It was quite the shopping list:

And a few items of sundry miscellany that were neither here or there. Now... how much would you expect to

I want it to be understood that a shortness of breath is something of a default state for me. Asthma creeps up on me by slow increments that are nearly invisible. I should be checking my nails for blueness, but if I do so regularly, I don't notice how much blue has crept up on me.

And no, dear Americans, I do not eat Australia's

Packing just got ten thousand percent easier. Turns out a discussion about luggage got me crosswired into thinking I could only take a carry-on-sized suitcase for all of my convention needs.

Now that I'm packing a proper-sized suitcase, all is well and I am much more relaxed about getting things together than I was, yesterday.

I'm up to the Unneccessary props, now. Things like "Maman's" photograph and the hip crank. I don't really need them for Bitzer's little routines because I've figured

I have some prednisone to help combat the bad asthma I've got. I should be done with it in six days, and back to what passes for normal before then.

The inside of the mask has a few more coats to go before it's prosthetic-ready. Naked paper maché is a thirsty material. 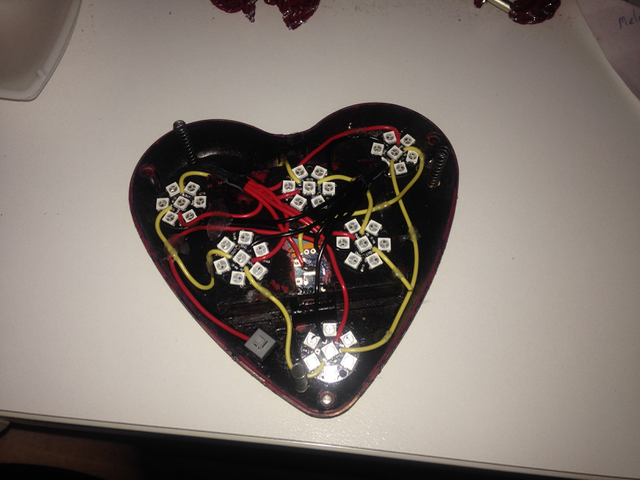 [Shown here: heart base with the springs inserted]

The final assembly is ludicrously easy, compared to the rest of it.

I got rid of the

There is fun times to be happening today. But first, the costume checklist:

Yes, dear readers, I finally figured out how to do Bitzer's Rosy Cheek(tm) and Beloved and I conquered the Arduino programming for the sparking lights in the heart.

Check out this test video:

We've finessed the code since this test run, but

The storm last night wasn't that amazing for us. Nor did it give us any respite from the humidity. Even though it's currently 28 degrees [84 Fahrenheit], it's that bloody humid that perspiration is literally dripping off me.

This is the exact kind of weather that has me skipping meals because I feel too awful to eat anything. Or has me snorking down ice cream by the bucket load because it's just too hot to think of eating anything else.

Halloween was a moderate success for Chaos [Mayhem skipped out because birthday party.

We went off to a more densely populated area and sought out every house with a front door light on. Chaos was happy enough to quit after one neighbourhood.

My feet are still mad at me. I haven't walked that much for a very long time [I used to crisscross the Brisbane City Centre on a regular basis] but haunting one neighbourhood with Chaos in tow was too much