...but not the one where I have to spend a lot of money to keep breathing.

Beloved and I restocked my medication stores, yesterday. It was quite the shopping list:

And a few items of sundry miscellany that were neither here or there. Now... how much would you expect to pay for eight items that you need to keep your good self alive?

Just to keep me breathing. And the really insulting part is that the $40 bottle of Olive Leaf recommends I take six of them a day. Six. Out of a thirty-pill bottle. Like fuck am I taking $6 worth of meds a day for five days just to do that again. I'm taking one of those a day and hoping for the best.

It was the supplements that bit our budget in the butt, by the way. Each bottle cost around or above $30 [sometimes WAY above in the case of the Olive Leaf] and skyrocketed our bill to staggering heights.

Let me put it in perspective: I usually manage to feed a family of four for two weeks on $400. Less if I'm being really canny about it. That's a vast majority of my usual food bill going on stuff to keep me alive.

I am high maintenance. Just breathing in costs us money. Nevertheless, I would end up causing a lot more woe and expense if I stopped, so this sad state of affairs must continue.

But it doesn't end there, O no.

Beloved could have paid for it all on the Amex card, but for reasons that make no firkin sense, the people at the shop had up and decided that, no, they weren't going to accept all cards and all comers. And we were pretty much next to skint already. This meant that Beloved had to tour home [15 minutes with good traffic] unearth the real emergency card, tour back [Again, another 15 minutes without holdups] park, and come to my rescue to pay for the dang stuff.

All because some administriviot couldn't be bothered adding all cards to their swiper thing. We would have even taken a surcharge if they'd deigned to do that... but apparently it's easier to hold a patient's medicine hostage whilst they go scare up some cash.

And now - fun with zip ties and superglue! 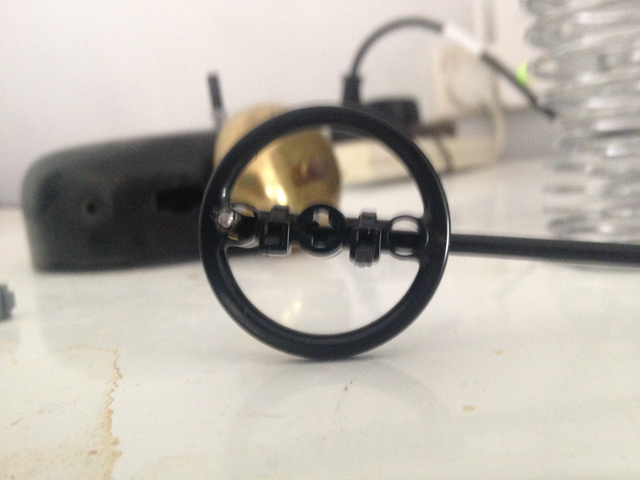 I'd already chosen to use coathangers for my crank handle, owing to their robustness and relative ease of manipulation. I got a set from our local Big W. The wire and coating are just the right width to fit into the lego holes, and after a little kludging with wire, Beloved told me to use zip ties.

I now own a zip-tie gun. And they're immense fun to use! 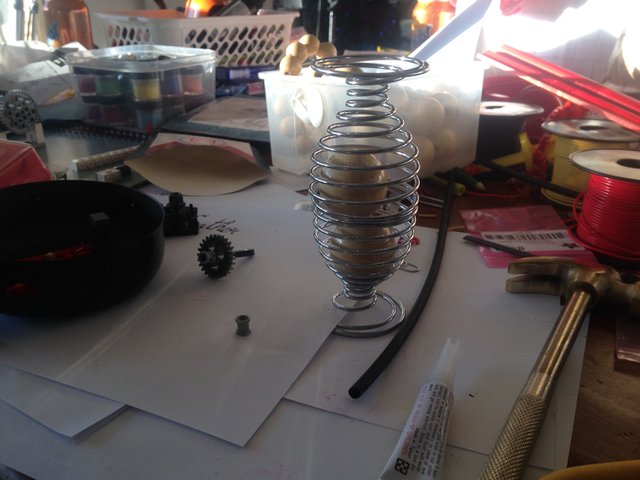 Even though Bitzer's a kludge-bot, she does have a sense of style, and it makes sense for her to have a semi-fancy handle. I happened to have a bunch of wire spring egg cups that haven't seen use since I got them, and some enormous beads lying around.

I thought it would be relatively easy to adhere the cups together to make a pseudo-victorian springy handle thing. With beads on the insides because I want to look so bloody clever 9_9

Turns out that stuff all actually works on really thick wire. These things were heat sinks. Solder would not stick to them. Superglue would not bond them. Araldyte would have probably not done a lot, either, because small bonding surface. Hot glue would have just peeled off. Anything hot enough to weld them would have incinerated the wooden beads. 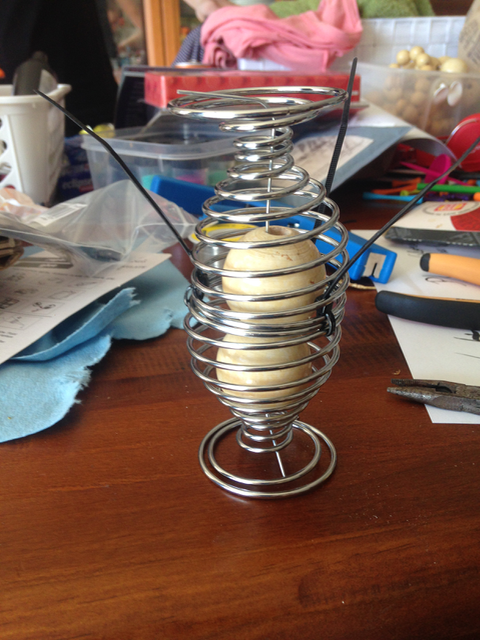 The ultimate solution is zip-ties.

As you can see, I elected to be really clever and make the threading onto the crank a relative doddle. That's a paperclip up the middle of the rigging. Just enough to keep everything lined up while I twiddle and tweak.

The real trick with this was using a pair of pliers to orient the zip-ties around so that all was both hunky and dory. They were then tightened and snipped short with the zip-tie gun in the background. 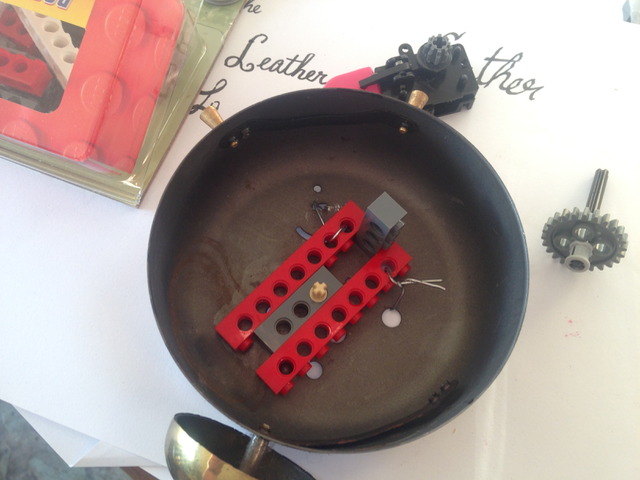 [Shown here: We dun fukt up]

Meanwhile, we accidentally superglued the lego rig to the clock casing so that the crank shaft could not possibly go through. Boo.

Fortunately we have power tools of the right dimensions and we made a new hole. Yay. 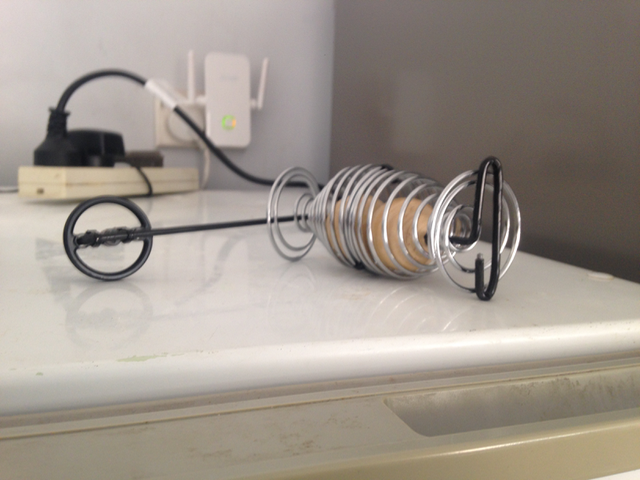 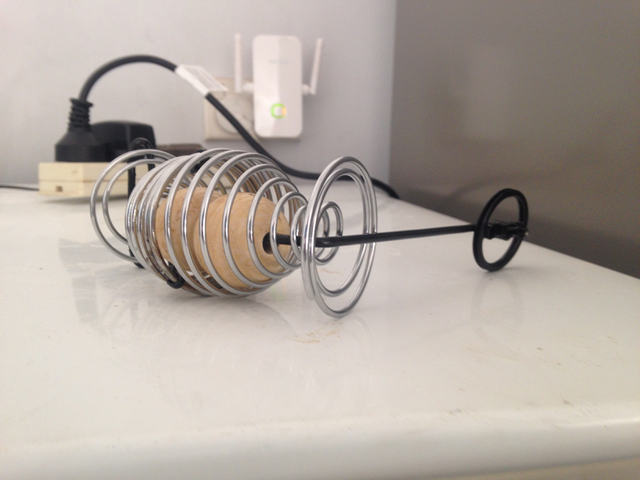 I've already tested it and it doesn't unscrew in action. Huzzah.

I'm not gluing the handle assembly to the clock assembly. This just means I can take off my handle in public transport or cars or elevators and thusly not inconvenience other people. 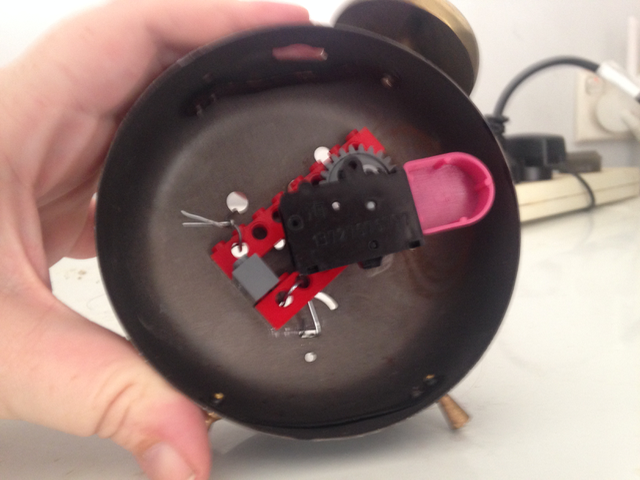 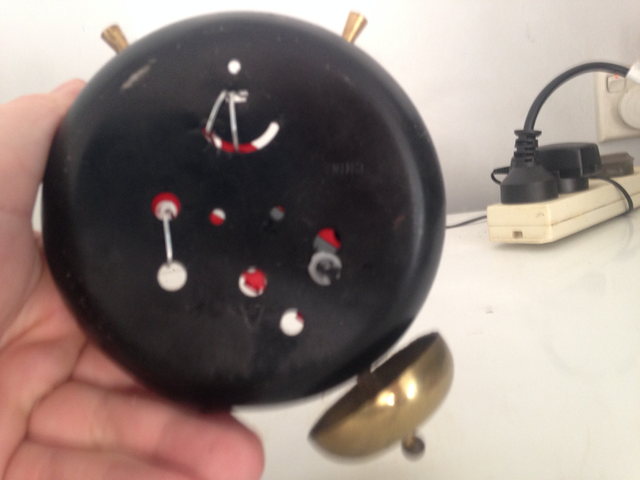 It's ready to go! Almost. I just have to figure out how to attach it to my good self. I suspect I might have to get a belt for that bit.

I still have coathangers and wire bits. I could plausibly rig up a harness with the extant holes in the clock case. Shouldn't be that much trouble.

I've already figured out that the 'belts' on my corset are both cosmetic and functionally useless. I should pick something more reliable as an anchor point for this thing.

A child with a temporary tall, formally dressed, spooky friend. He has massive hands, a bone white head and.…

Sans: The actual Grim Reaper -- Gallifreya [AN: I've seen Reaper!Sans on Tumblr and I have yet to…