Yes, my dear readers, I am back online! The heat sink on my compy had some... issues.

But of course you want to hear about Friday.

I got up and knew I could not stream because everything was borked. So went ahead and unplugged everything and got rid of the garbage on my desk. 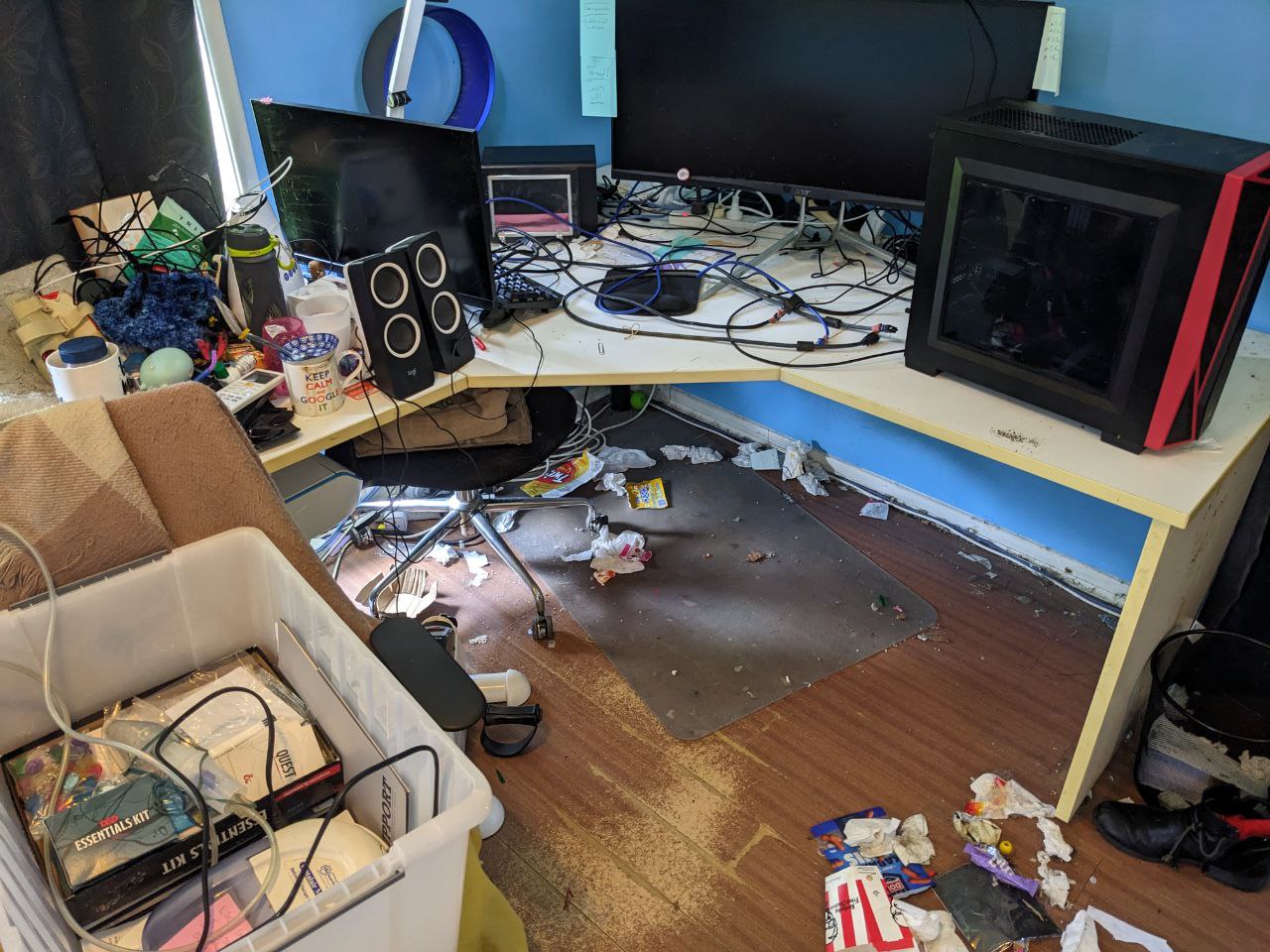 [Shown here: A corner desk with two monitors and a computer tower on it, there's a lot of mess on it, under it, and on the floor nearby]

No, I did not get under my desk to sort out the shit down there. I am not the most flexible bean.

Once I got all this done, I settled down next to Beloved when she was sleeping to stand by for impending help.

I was standing by for a long time.

Beloved woke up and went to work by remote for some hours. I felt a little ticked off about that. At least it was relatively brief work.

At some point, the idea of taking Miss Chaos to do some Christmas Shopping was floated, and she didn't take everything she needed to use the change she had saved up... so there was a bit of a Leyland's Tour before that ball could get rolling.

I wrote almost a page's worth of text for A Devil's Tale during all this Hurry Up And Wait, for those who are interested.

It was closer to noon when we finally got the thermal paste and canned air for my compy repairs.

So it was like later in the afternoon when we all returned with out bounty. 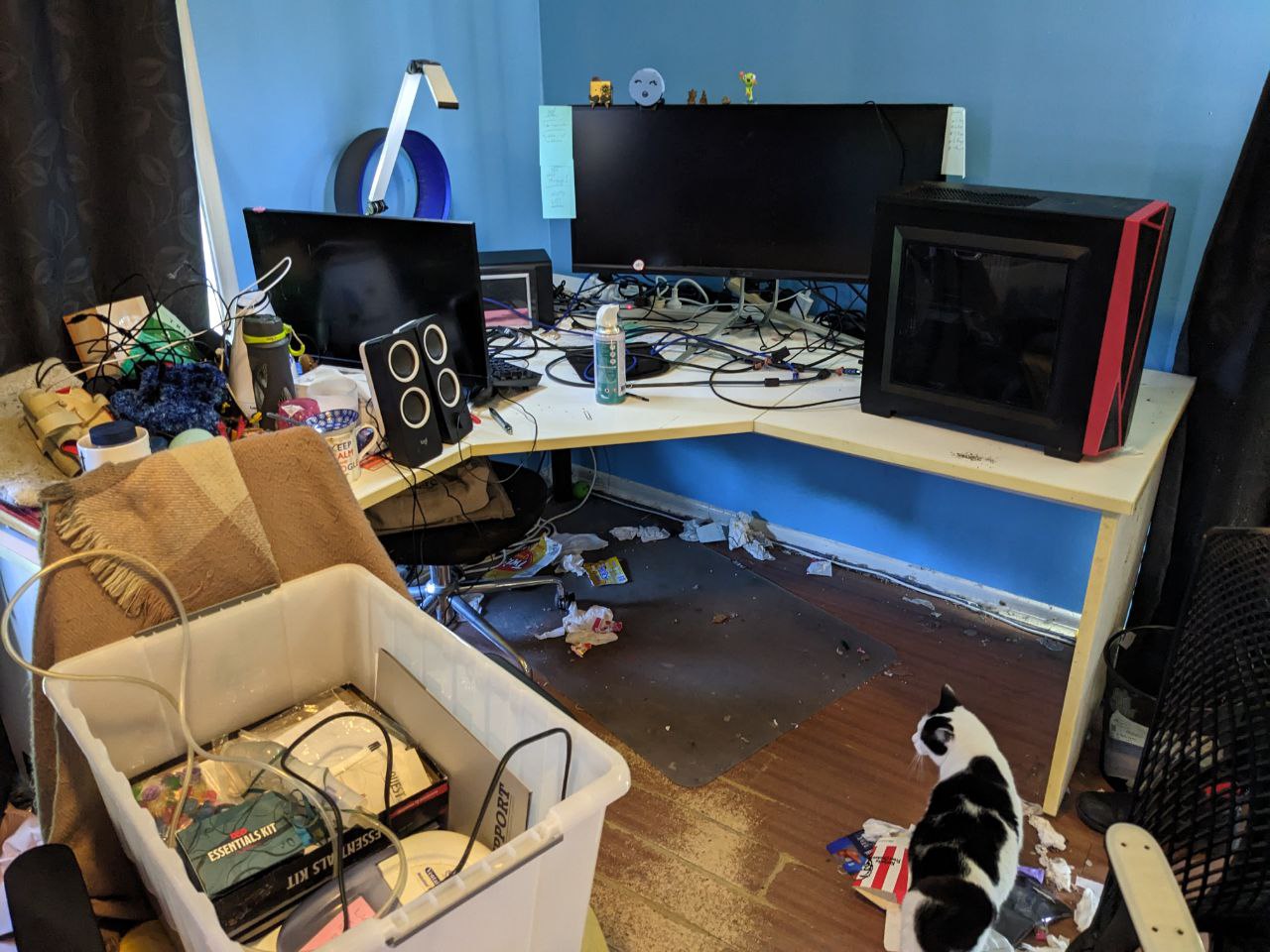 [Shown here: Same desk and mess, but there is now a can of air and a very small syringe of heat paste on it. There is also a white-and-black cat in the lower right corner of the picture]

Beloved also had a telechat with fellow trans people. But she helped me with compy surgery and found the root cause of my troubles.

[Shown here: The heat sink of my tower, with the crumbled remains of old heat sink paste on it]

That stuff was like chalk dust. So after a scraping and replacement of that nonsense, any spare scrap of fluff was evicted with the canned air and then I got to reassemble everything.

It was closer to 10 PM by the time it was all working.

Which means you get to see how I'm working now. 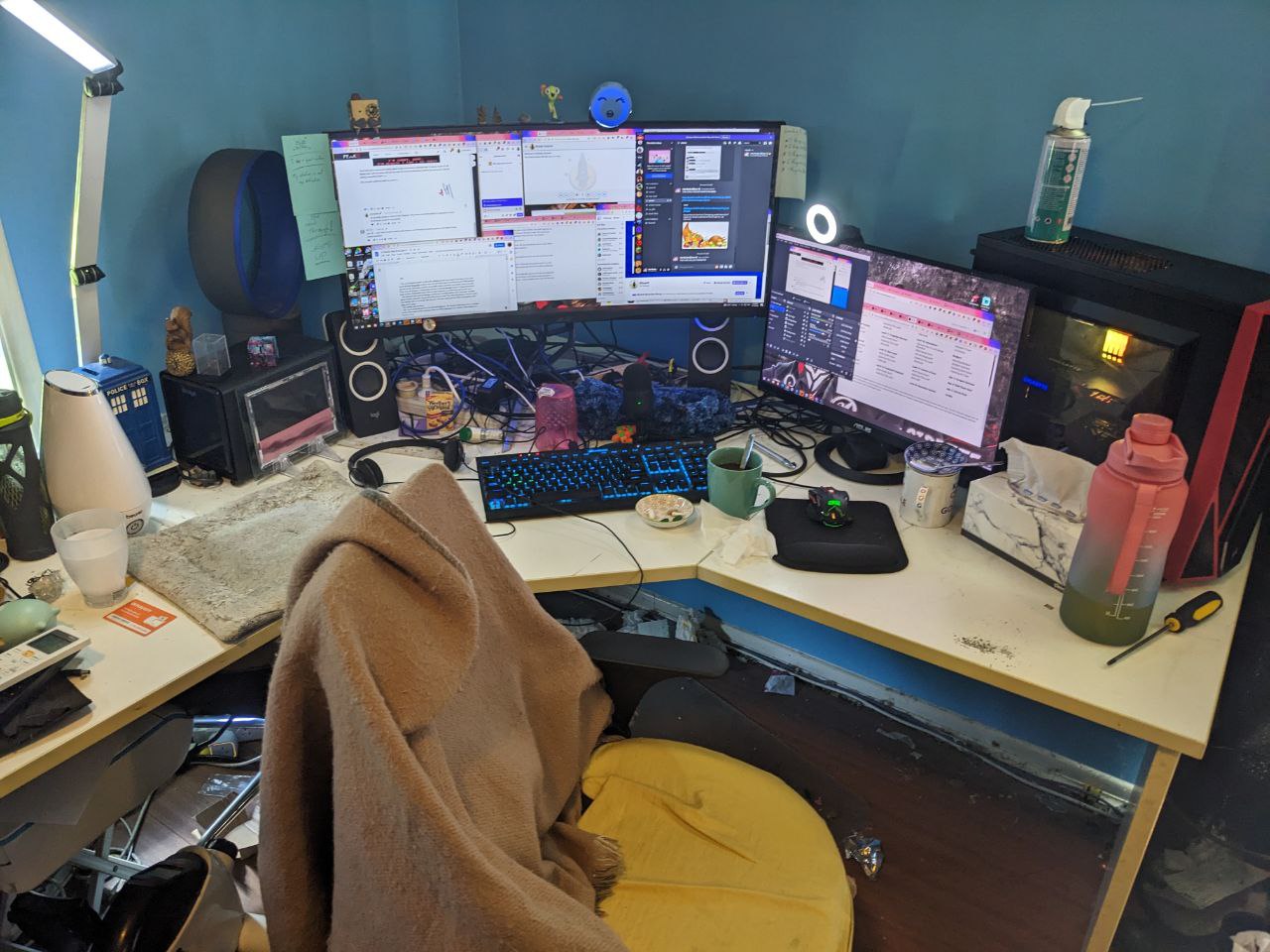 [Shown here: A corner desk with two monitors, a tower, and other computer attachments, the computer is on and operational. It's still a messy desk, but it's functional mess]

I have managed to walk eight kilometers, today. The first five at Parkrun, and the other three after a break for snackabobs to tour a different park's route.

I got a lot of pics of critters, today. And something else I could do to gather an audience.

Apparently people like to know about the things I do when I'm not at any of my keyboards. I might make people curious about the writing via lizard pics. I dunno. Worth a shot.

Anyway, I have some stories to share, so let's get on with that.

“Wear a mask for too long, it will become your face,” and, “fake it till you make it,” mean…

Former Vorax, they gave up raiding which is all but unheard of in their species, much less their particular…