If you want to know all about the Fighting Fuctoy, you won't find much about it on tvtropes.org at all. Nope. For that, you have to go to sites written by, and run by exclusively female authors.

Or you could absorb this picture: 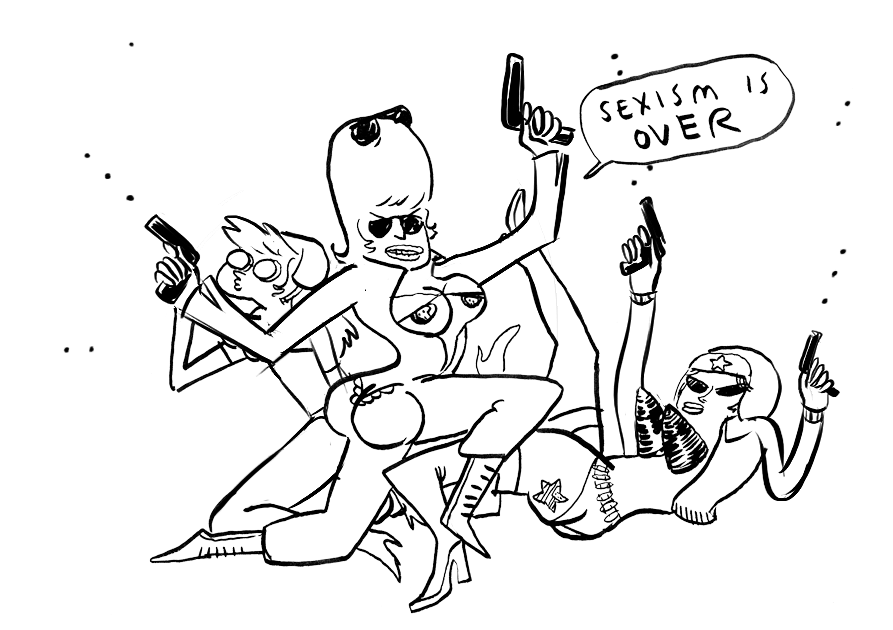 Any attempt to put this sort of thing up on tvtropes results in, I presume, a phenomenally unbelievable amount of manbaby whining.

But I had the dubious privilege of watching this trope evolve. It began in your Action Guy movies where the love interest was no longer allowed to be a helpless damsel [Unless, of course, the Action Guy movie was happening in a conveniently earlier time when these sorts of shenanigans are invisible] so she had to be tough.

Action Girl very frequently whupped someone's ass within five minutes of meeting the hero, or met his initial romantic advances[or sexism] with a punch to the jaw. All this to prove that she is Strong(tm) and Independant(r).

Said Action Girl, in the beginning, was almost completely useless and hostile to Action Guy for a majority of the movie until the inexplicable kiss/sex in the third act.

As she evolved, she got to be a little more capable. But the whole point is that she exists to be sexually or romantically available to the Action Guy. In more recent instances, she's helped raise Action Guy to become the Hero Foretold, or give him a hand up in the Level of Badass that Action Guy needs to win the day. And then stands back to cheerlead Action Guy from the stands when it would be a much shorter story if she just went into the baddie fortress and did her thing.

Some Fighting Fucktoys exist to be sexually appealing to male viewers, and thus don't get an Action Guy to cheer on. This happens a lot in video games, and characters like Lara Croft and Bayonetta stand out as prime examples.

This is why Mako Mori stands out in Pacific Rim. She's a whole person with her own story arc and a supportive role that does NOT consist solely of beating up dudes/the hero and then standing back for him to win the day on his own. In her case, it was the dude who helped her out and complete her training in badass, and then they both worked together to win the day.

As long as women are presented on screen for the male gaze, there is no such thing as a Strong Female Character. Just a Fighting Fucktoy in sexy armour.

What writers mean by "Strong Female Character" is a female character who could plausibly have an adventure movie on her own.
One who isn't a paper thin veneer of toughness wrapped around a Manic Pixie Dream Girl.

So if you can't imagine you SFC scratching her arse or having a bad hair day, or even having enough of your Action Guy's bullshit... rewrite that shit. You'll be doing everyone a favour.

How about one where Aliens are stunned at the absurd growth rate/ regenerative properties that humans seem to have.…

"Fat grubs in butter sauce." this was from a Lizard culture's idea of Snack Food. Humans have popcorn, crisps,…