I have vowed to make Mayhem and I do the rowing machine twice a week until we get buff or the machine breaks, whichever happens first. It's a five minute stint. We go as fast as we can for as long as we can and then slow row for the rest of the time. In the unlikely event that we can keep up a fast rowing pace for five minutes, we'll move up to ten.

In my second session, I made it to two minutes and ten seconds of fast rowing and seven hundred and seventy-eight meters all up. Not bad for someone who's still getting asthma from escorting Chaos around her school oval eight times. Last Friday.

Or it could be something in the air from Sneezin' and Wheezin' Season. I don't frelling know. It feels like there's a smallish ball pressed into my clavicle all the time and the air is just a smidge too thick to breathe comfortably.

BUT, on the upside, I did do some arting. 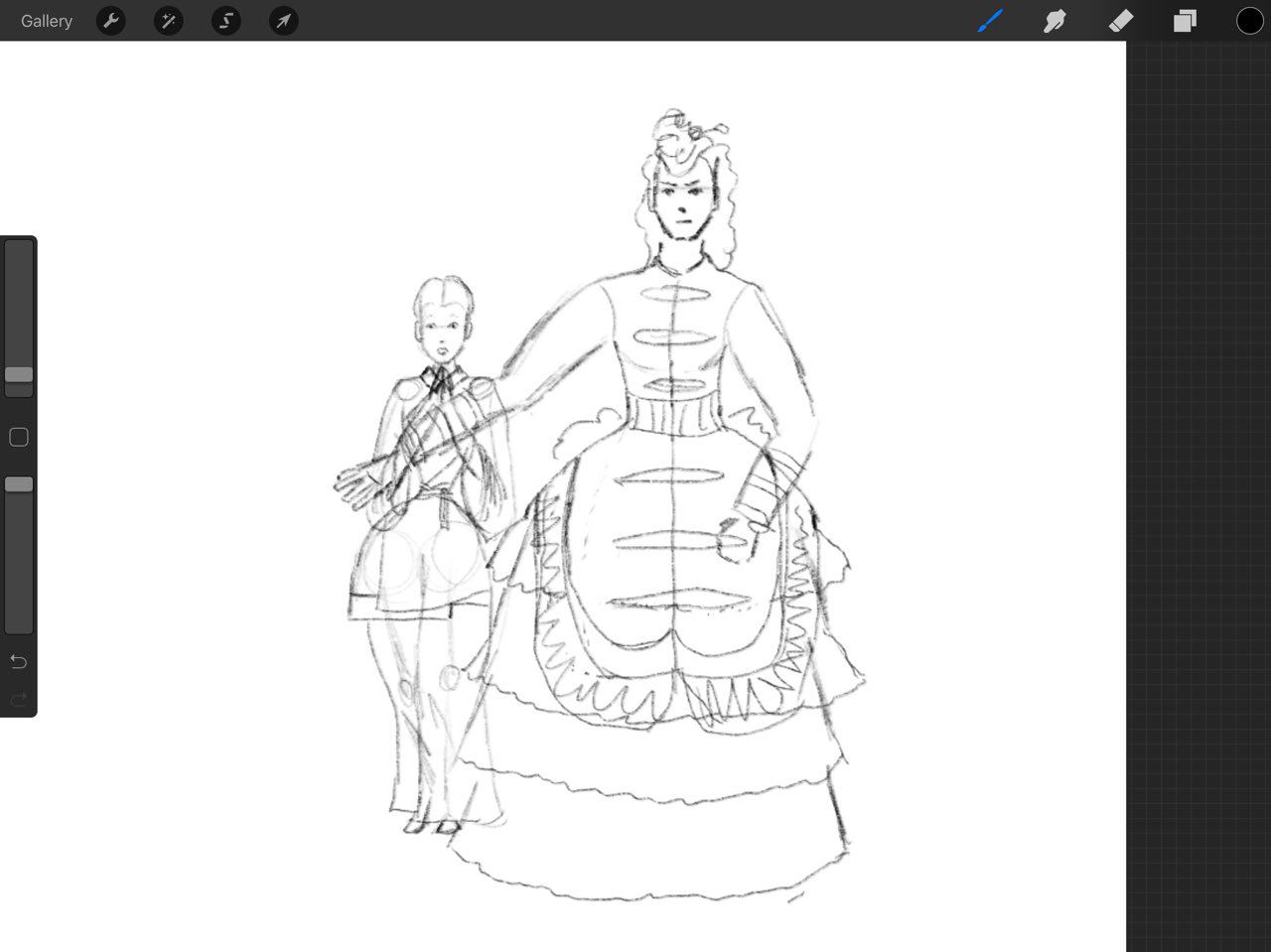 [Shown here: Lineart drawing of a statuesque woman in a Victorian era dress, guarding a much smaller woman with a Victorian-era figure, who is wearing asian-style trousers and crossover top that is clearly too large for her]

I'm pretty sure I did Lu's right arm too long. Shall fix later. And yes, I did purposely draw Lu's first three fingers as being even. People who know that this book is about werewolves will know what that means :D

Next Monday, I'm sharing my reference picture for these totally extra dang dresses, with my Patreon Patrons. Yes. I am doing all this noise with ONE reference picture. Because it's the only one I could find of that outfit.

I'm drawing all my figures on different layers so I can fiddly fartarse about at my alleged leisure. Layers are my firkin friend.

Tomorrow, though, I plan to do more for SESP.

Last night's stew was a definite success. Beloved and Mayhem each had more than two helpings and helped at least halve the amount of nommables in the pot. Chaos is in scenic Coominya and had to miss out on that. The remainder is boxed up and waiting to cool to room temperature before we cram it all in the freezer.

I also managed to snag some scotch fillets, which will become devoured with any remaining vegetables left over from making the stew. But not today. Because Mayhem and I have noodle arms after all that rowing.

Doctor Disco sighed. Clever, he enjoyed dealing with. Idiots were even more fun to be had. But an enemy…