After other species have somewhat adjusted to the whole “vicious predator” == “family pet” thing, they run into this: 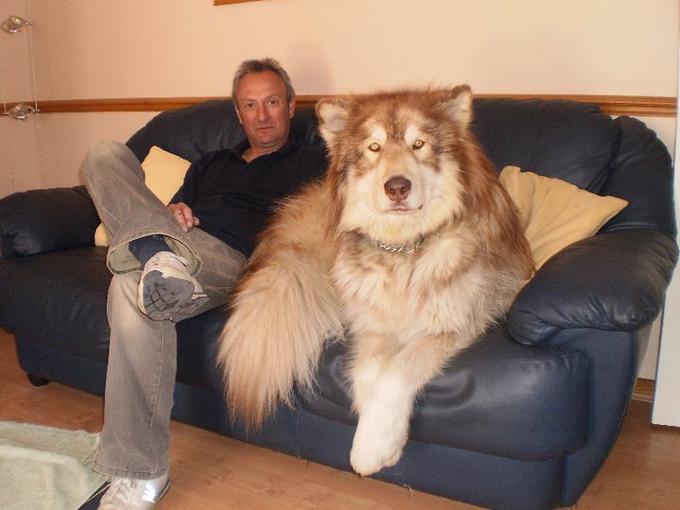 That is a predator larger than an adult human, whose head is roughly that man’s torso’s size.

He is a descendant of one of the scariest predators in the world casually flopped on the couch and he loves belly rubs and ear scritches and is just a big fluffy goofball that loves mauling tennis balls - well, maybe volleyballs are more appropriate, given his size.

If his master ever truly pissed him off, he could casually crush his skull, but he doesn’t because he loves him.

And humans think he’s adorable and fluffy. The reaction is not  “HOLY SHIT THAT THING’S HUGE, WATCH OUT!”, but rather “aw, he’s so cute! I wanna wrestle with him, and hug him, and call him George”.

The humans’ pet carnivores were beginning to diversify. The cats generally stayed the same size, though there were some that varied in key aspects, but not so alarmingly as the dogs.

There were tiny ones roughly able to menace a keet. And the ‘normal’ size of dog that managed to make newcomer Numidid nervous despite their friendly demeanour.

And then there was George.

He could, T'reka couldn’t help thinking, easily predate on the human or her children. He could definitely predate on any Numidid in the colony. Yet, when the gigantic canine came up to her, it limited itself to sniffing.

T'reka froze, concentrating on her Science Breathing, as the mouth of a predator investigated the air around her. She let George sniff her knuckles and nervously massaged an ear as she’d been taught with smaller dogs.

The effect was exactly the same. The dog recognised her as an ally and not prey. Leaning into her touch and knocking her off her feet.

“Dog big enough for make saddle,” she said, learning how to brace herself against George’s affections.

The human laughed. She was one of the ones who had learned not to show her teeth to Numidid. Lyn. “For bird, be likely,” she answered, patting her dog on the ribs. “We could train dog for Numidid saddle.”

“Being remember Terra poem of Lady from Niger,” T'reka answered. “No wanting ride of predator.”

“Much wise,” Lyn the human clicked to George and he came to heel. “Bird be afraid, predators. Not train good.”

The children swarmed over the enormous dog. Hugging him or scratching various areas of his enormous, fluffy body. “Human make dog this big… make for what?”

Lyn shrugged. “Make for sing loud? Self not knowing.”

Humans had to be insane.

darkbookworm13: technicolour66: whittyonernc: the-quiet-dominant: Time to reblog this I think So important now, especially since THAT...

darkbookworm13: technicolour66: whittyonernc: the-quiet-dominant: Time to reblog this I think So important now, especially since THAT movie will be…