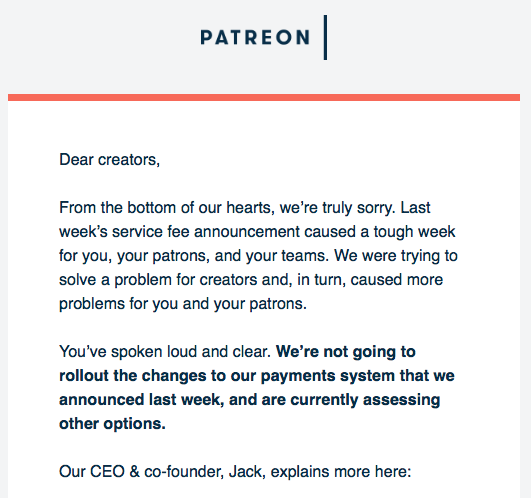 [Shown: Screencap of an email from Patreon. Text quoted below]

From the bottom of our hearts, we're truly sorry. Last week's service fee announcement caused a tough week for you, your patrons, and your teams. We were trying to solve a problem for creators and, in turn, caused more problems for you and your patrons.

You've spoken loud and clear. We're not going to rollout the changes to our payments system that we announced last week, and are currently assessing other options.

There's a button beneath that which links to the CEO valiantly attempting to cover the company's arse. You will not shake my belief that this mob knew exactly what they were doing when they were doing it. To whit: Robbing Peter whilst looking like they were paying Paul, but in actuality lining their own pockets. And also shooting themselves in the foot.

But no. They went for it and got a kick up their complacency.

Now. If they've really LEARNED from this -which I doubt- they'll figure out a proportional fees and charges system that gives more money to the creators whilst also not gouging the patrons for donating. That's how crowdfunding should work.

But not, I fear, for very much longer.

Sooner or later, they'll figure out a more insidious way of leeching money off of content creators and donors alike. And that's why I'm keeping my Ko-fi account.

And keeping it visible.

Sometimes we can't do much to make things better, rather like emptying the ocean with a teaspoon. But, even…

Challenge #01804-D343: One Confusing Afternoon Over Mocktails at Nik's

aliens learn about the dangers of human psychopaths and other mentally ill humans -- Anon Guest [AN: Speaking as…