Nine hundred and Ninety-eight to go. I got a response from my last query and... 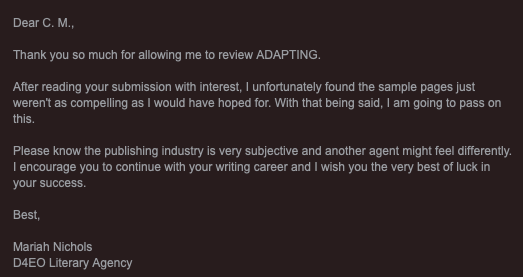 My writing is evidently not compelling. Okay. I was also given the tip to tell folks more about myself. Agents want to know about the authors, even when the authors think of themselves as dull.

Next to pitch towards in PSLiterary and I honestly can't remember if I've sent Adapting their way previously or no. It's a three-paragraph query letter and a Clayton's Rejection, so I'll be looking up #MSWL by this coming Monday.

I'm learning some things, at least.

I know to sell myself a little better, and I'm finessing each pitch every time. Let's see how many iterations I have to do before I get there.

I'll be mentioning my Patreon in my pitches henceforth, just in case they want to cruise by there and see what else I'm up to. Powers know I have enough content in there.

In more personal news, the family is protected from flu, and I have a cyclone migraine - so there's probably a heck of a low somewhere between here and firkin Rockhampton. Ow. Of all the possible superpowers, why did mine have to be pain-related weather detection. We have weather radar for this bullshit.

I'm looking forward to the weekend because those are the days I deliberately avoid these levels of nonsense. Why are so many people so firkin dumb about proceedings?

It's almost Bus O'Clock. Time for me to attempt to focus on my 300 words in my novel. And whatever other BS my brain makes me want to do today.

I have no idea what I'm going to talk about over on my Wordpress. Let's find out together.

I sent Adapting off and now the waiting game begins. The last potential publisher gets to wait until July or the other lot gets back to me, whichever happens first. They are my last, best hope (help me Obi-Wan Kenobi...). One gets back in 30 days, so word by the 12th of March or they don't want me. Their loss.

But I did it. I was brave and sent off the files they demanded. Yay me. Now I have most of an

What I gotta do:

What I want to do:

Not only did I stay up later than normal, last night, but I'm also battling the "nobody wants me" worm-eatin' blues. All because the publishing house I sent Adapting to has not yet got back to me about

I don't know what's going on with me, but it might be interesting to look into it. My batteries are regularly drained by the end of the day. Protein doesn't help. Sugar certainly won't. Having a meal doesn't quite get me back up there, but the willingness to cook it is missing.

I probably have the morbs plus anxiety because trying to sell Adapting is getting to me. That and the fact that I'm only halfway towards the Lappy of my

I could not recover the email that my system ate. Woe. So I rewrote it. And sent it. And now I am merely attempting to not perish from the sheer anxiety of it.

8th House, the first publisher on the block, has stated nothing about simultaneous submissions nor a turn-around time. Darn. I feel like I should wait until September before trying another publisher, repeat in October, and then lurk off the radar until February. Thus avoiding the stench of NaNo.