Beloved wasn't just gassing about getting that second cat. We wanted one with the same rough age as our new kitty, now christened Pippi. 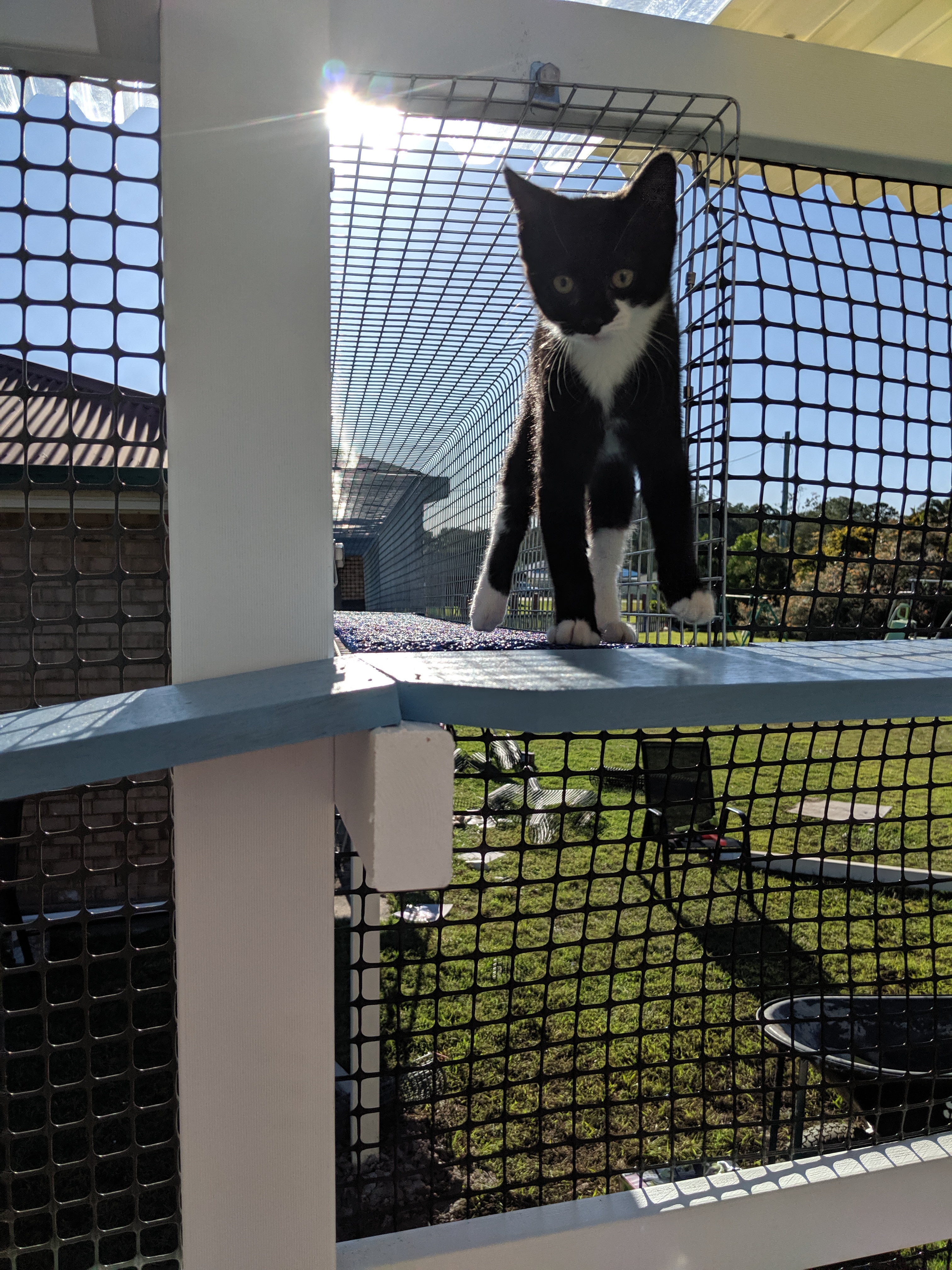 [Shown here: A black and white kitten with white spats, one white sock, and a white blaze on her neck and chest]

The chase for a second kitty had Beloved wanting a unique little kitten, and they had their heart set on some female ginger kittens but they were either too far away (Cairns!) or taken by the time we got there.

Finally, we found a new little friend care of SCAR - the Sunshine Coast Animal Refuge up at Sippy Creek. 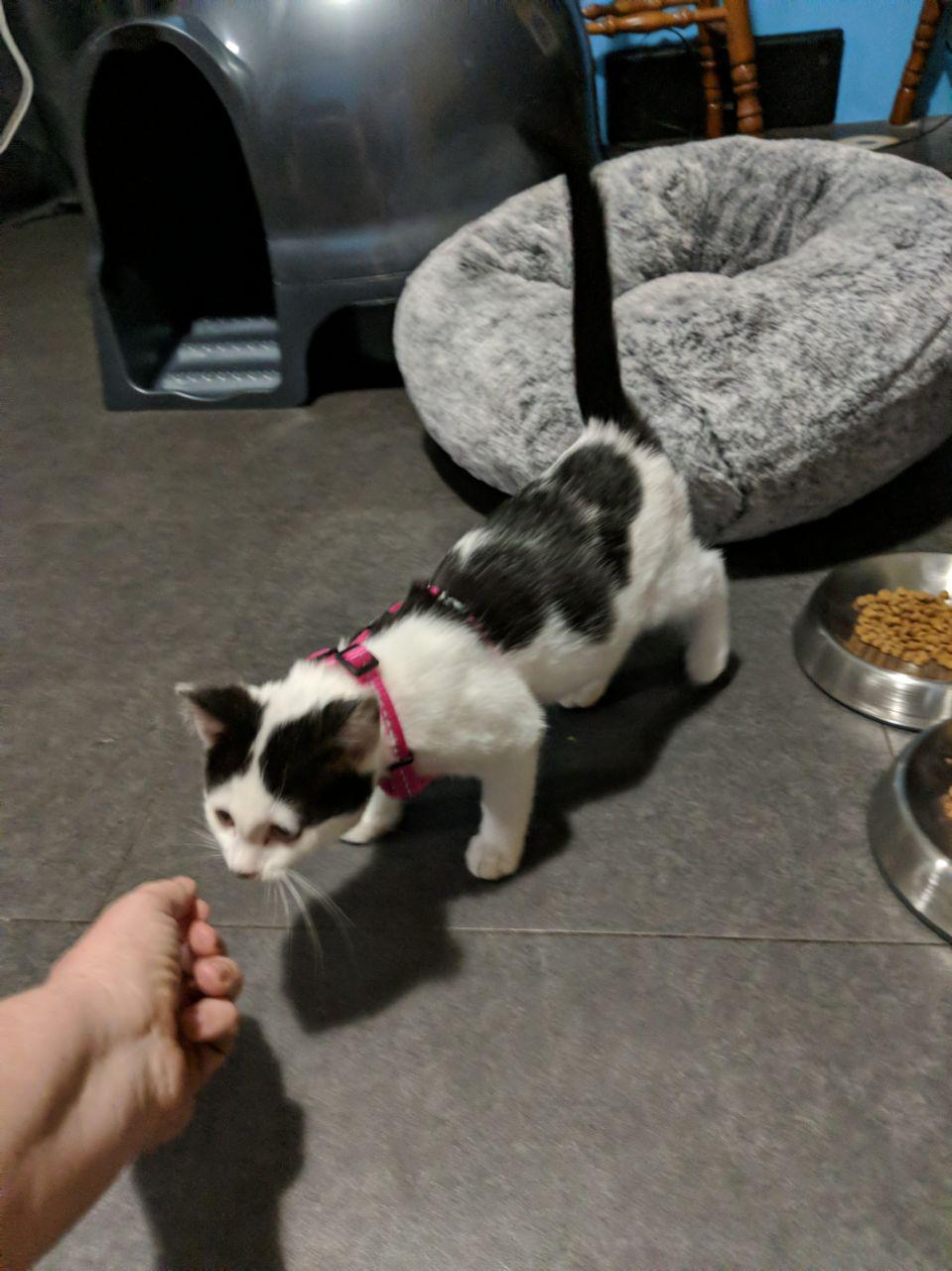 [Shown here, a white and black kitten with black ear markings and tail, and blotchy black blobs on her back]

Say 'hello' to my Beloved's little friend, Jolie. She's nine weeks old, but that should not matter in the long term. They've had 24 hours to get used to each other and though Pippi is still hissing, they're getting closer and closer.

Turn around in two weeks and they'll be in a purr puddle and grooming each other. You watch.

Today, we're adding a little lattice to the big junction box, because both tiny kitties can squiggle out of there. It's squiggle-proof soon. It just needs a few (hundred) staples and all will be well.

But first - a tale. Coming soon.

It was a good life. Thingone and Thingtwo agreed. Plenty of warm spaces. Lots of nice food. Halls to have a good rumpus up and down. Furniture, especially, to scramble up, down, into, out of, and under. The only thing missing was the world outside the windows. No matter how they howled and yowled to be allowed to play with the birds, their

what would be a "normal" day for a cat in a space-station? -- Anon Guest

[AN: I originally thought - normal pet cat or Skitty? And then I thought... why not both?]

The day begins with the rude noise as Elith's Feedme[1] stirs in their sleep nook. Elith used her claws to show mild displeasure at having her own rest disturbed by the movement of the Feedme. Not that she could stop the bald, two-legged creature. Feedmes were much bigger

Humans are social creatures. Even the solitary ones. - MolluscsAndMonsters

Humans like me have a saying: No man is an island. Or words to that effect. And... they're right. Even antisocial assholes like me need to brush shoulders with other cogniscents now and again.

But that's why I have the mail run to the cul-de-sac strings. You get wormhole chains like those. Places where it's ten or more jumps to any nexus, anywhere, and the places along the trip are the places

If you truly hate someone give them a baby bear. Comment from Historical source. Nobody mentioned Bears just get big. But what if you give them a pregnant female house cat? -- Anon Guest

Across societies, across worlds, there are things that could be counted as gifts - but definitely aren't. Drum kits for the hated one's children. A bear cub. A baby ape. A dragon's egg. All of those and more can only be called trouble. And then there is the

What to do when a 'Skitty' decides Your space is a nice place to live. -- Knitnan

There was a cat sharing his sleep nook. Curled up in the crook of his knees and purring loud enough to simulate a malfunctioning cooling fan. It was the same cat that came into his domicile every evening and Cal gently but insistently shoved out of his doorway before retiring to bed.

He had no idea why this was happening to him. Some folks fed

http://goddammitstacey.tumblr.com/post/155552788003 "I just turned to my housemate and said, “y’know, we’d never know if we were haunted” because we have four cats between us, so every clunk, bump, and crash gets entirely ignored and now I want a movie about a ghost becoming increasingly desperate to haunt a family but they have cats and so the poor dear goes completely ignored" -- Gallifreya

Nothing more than that. Simply that I was, once.

"What happened to the scarf of invulnerability?"

The cat in question growled from its position under the ottoman. Yellow eyes glowed out from the shadows.

Now the growling from under the ottoman took on a slightly musical quality. So... the cat wasn't just pissed at him.

"I know she'll try to take my arm off

These cats live in our office, this is where they sleep

Have you considered only one cat sleeps there, and the rest are…… Fun fact: the cat is checking the baby’s mouth to see if it is still breathing. Were it not breathing, the cat would commence to eat it.

Fun Fact: The one article I could find about a cat owner being eaten after their death also mentions a pet dog on the premises.

Fun fact: if cats were interested in eating humans, they would also lick up any spilled