There's a meme on tumblr of a photoshopped etching that originally warned of communism, but is now... somewhat improved. Instead of the original caption, the spectre of Death now carries a giant scroll that reads, Lord help me, I'm back on my bullshit. 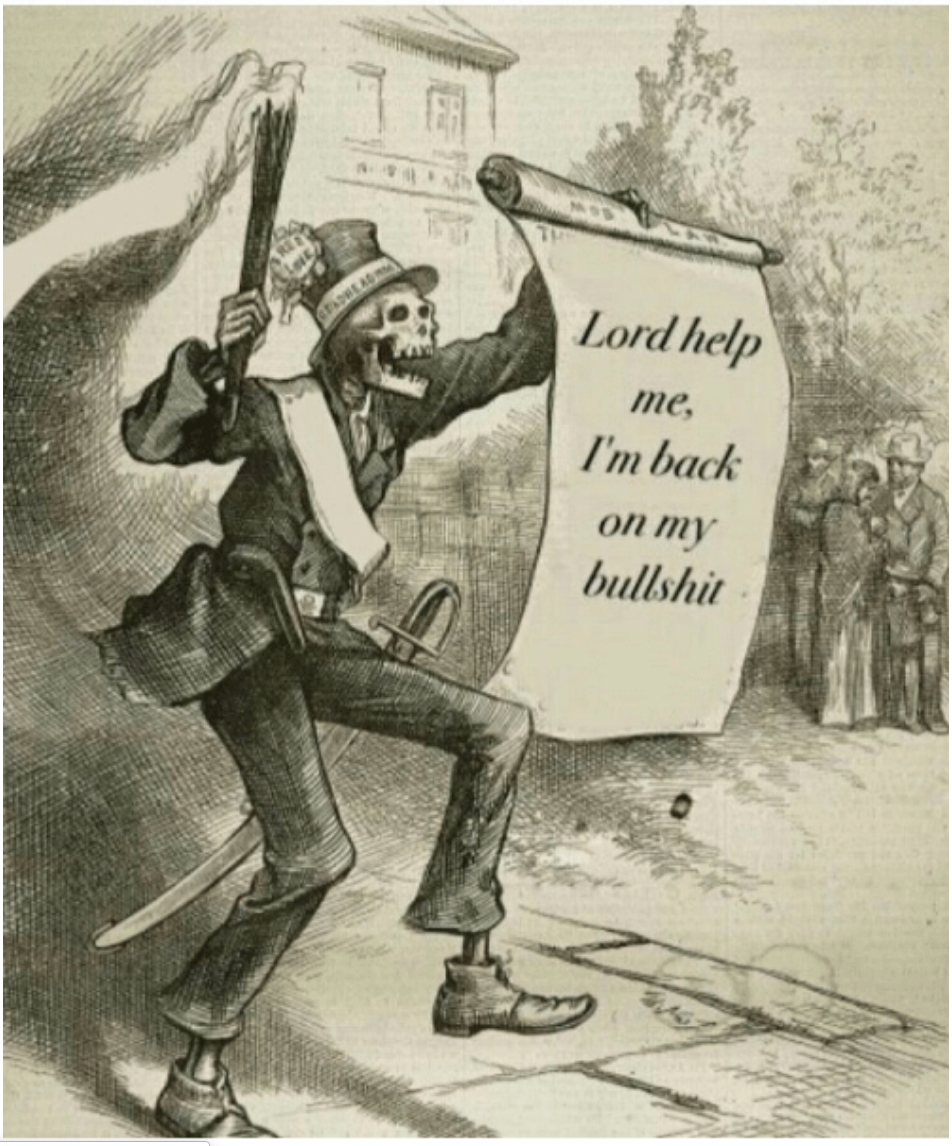 [Image of the very meme of which I spoke]

My bullshit is succumbing to assorted temptations instead of paying attention to what I should be doing for my own gorram good. Like... learning Java, CSS, how to do this or that or even getting back towards SESP like I keep gassing about.

My bullshit in the past has been taking on five million fragmentary ideas and never finishing one fucking thing ever. It's been sweeping into a new thing and forgetting to wind up whatever was going on with the old. It's been new toys and new obsessions and burying myself in firkin clutter that I'd take care of "later".

Thanks to assorted shenanigans involving more solar panels and finally getting that powerwall that's been gas until this moment... the carport looks more like Tutankhamun's packrattus than anywhere we could plausibly fit a car. There's been some rubbish dumping going on and gorram it... we used to be nearly at the point where we could park a firkin car in there again.

The bedroom's getting like that, too. Beloved has just... not been putting their clothes away. I, too, have said 'fuck it' and left more than a few things lying around and I can see the goat trails returning and... refer to the above picture.

Procrastination is no longer my copilot. It's taken the wheel and shoved me in the firkin jump seat. Inertia's running copilot with the instant gratification monkey and I would so much rather be farting around having fun than actually working on anything and... yeah.

Back on my bullshit.

I might need a Capital-B Break from everything, but this is the worst time since publishers could see me being a slackarse right after I've told them I never firkin quit. Besides, we both know I'd never be able to stick to not-writing for very long. Hell, on one day when I got my TAZ flash fanfiction up super-early, I spent the afternoon pondering whether I should write a second one.

...whilst forgetting I had an entire unfinished fanfic I could be working on instead, or drafting my Trello notes for the upcoming Kingdom of Sand trilogy...

Indulging my temptations is not good for me. Neither is obsessing about everything that could plausibly go wrong. Knowing this doesn't stop me in the slightest, but at least I know when I'm sliding back into my bullshit.

That's gotta be worth something, right?