Anyone who follows this blog knows that the best band in the world, Steam Powered Giraffe is bringing out another album, Quintessential, around Septemberish.

Part of the hype includes little sneak peeks that the members release just to hear us make interesting squeaking noises. I'm sure that's their motivation.

And I now have permanent tabs open to listen to said sneak peeks whenever I'm feeling particularly unmotivated. Look: 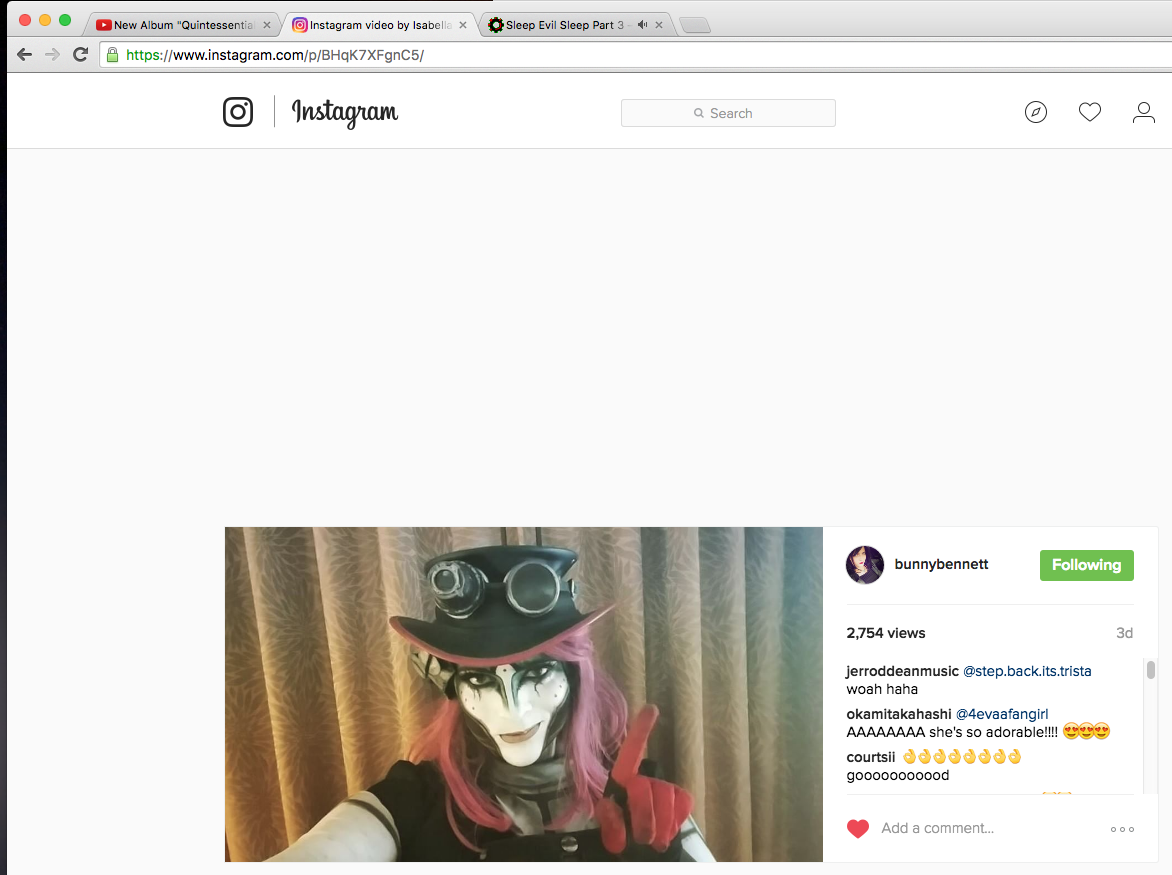 [Shown here: Screen shot of a window on my compy featuring three tabs. One each for Youtube, Instagram, and the Engineer-ateer site]

Only Engineer-ateers can listen to the previews of Sleep, Evil, Sleep. Go to the Steam Powered Giraffe website, sign up, and listen to the wonderment. You're welcome.

The Instagram one is interesting for me because it features a snippet of a song currently titled Malfunction. Which is all about being proud of yourself, including the bits that other people might count as flaws.

WAY back when I only had four books to brag about [I have 7 novel-length titles now], Isabella gave us an idea of what she had planned. But now I'm worried that the concept has changed and the video I rushed in at the time is now no longer useful.

And she's not exactly the quickest person to get back to little ol' me about anything at all. Not helped by the fact that I sound exactly like a rabid fan of the "avoid or get murdered" variety1.

I need to chill. Seriously. Sending in a second, improved, Malfunction video is not going to increase my chances of being used for a video. I'm ugly. I know it. The odds of being a chosen one are not in my favour. It doesn't matter to anyone else that the one chance I had to see/meet them so far was the best time in my life. Okay, maybe third best. Right up there with bonding with Beloved and meeting my little darlings for the first time.

...but, dangit, I want to. So super-duper hard. And it's yet another thing that is going to require help with. Plus I can shoot a second video that I want to do just for fun on the same day.

We can't always get what we want.

Something for the SPOEns: "Words are perhaps the most vulgar of all of humanity’s inventions, in that there…

[Person #1], along with the dry wit and perfect sarcasm and near-unflappable calm, is a secret drama queen. Like,…